Naryn, Kyrgyz Republic, 27 September 2013 – The University of Central Asia (UCA) announced the official start of Phase I of its Naryn main campus construction on 27 September 2013. Held at UCA’s School of Professional and Continuing Education Town Campus in Naryn, Kyrgyz Republic, the event was attended by local government, UCA representatives, contractors, as well as local and regional media.

During the press briefing, UCA Director General Dr Bohdan Krawchenko provided an overview of the University’s academic programmes, campus plans and expectations for student life and shared the campus design and architecture.

“In three years, the main campus site will house our academic and residential facilities and the campus will be a hub of intellectual activity. Our first cohort of students will make history as UCA’s class of 2021,” said Dr Krawchenko.

In connection with the construction, Head of the Aga Khan Development Network Representation in the Kyrgyz Republic, Mrs Nurjehan Mawani underlined the long-term contribution of this milestone event into the local socioeconomic growth of Naryn: “This new stage of the UCA evolution will create additional economic opportunities for the local population through engagement in the construction. It will also further catalyse development efforts of the various AKDN agencies working in Naryn oblast in the economic, social and cultural sectors to contribute to the improved living standards.”

Ms Chinara Abdraimakunova, Vice-Governor of Naryn Oblast, addressed the media and emphasised the importance of the UCA partnership, “The Government is pleased to acknowledge the Aga Khan Development Network’s partnership and economic impact on the Naryn community. The University of Central Asia has 180 young people working on its campus construction and we look forward to more economic opportunities. With the inception of UCA, there is an increase in intellectual stimulation through its School of Professional and Continuing Education,” she said.

The briefing was followed by a walk-through of the main campus area which was presented to UCA by the Government of the Kyrgyz Republic.

The Phase I construction of the Naryn campus which has started in September 2013 includes preparing the site and building enabling infrastructure such as power and water supplies, surface water and sanitary drainage and telecommunications systems; internal roads and parking facilities; UCA site offices, enabling works for contractors offices; a concrete batching plant, stone crusher equipment and equipment storage areas; security facilities; and high quality welfare facilities for staff, including a restaurant, medical facilities and showers and lockers.  Considerable investments have also been made in construction materials for concreting works and construction equipment.

The campus master plan and concept design were conceived by the award-winning architecture firm Arata Isozaki & Associates, while the detailed design and construction documentation was prepared by AECOM UK.

In early 2014, AECOM will complete the detailed design of the campus. UCA will then employ a series of contractors to construct the campus, beginning with the structural sub-contractor who will build the individual concrete structures to house the 12,200 square metre (m²) Phase I facility. The facility will include an academic block, housing a library, classrooms, laboratories, a dining hall with faculty housing, and student dormitory buildings. Year-round construction will facilitate the completion of the facility in the spring of 2016, followed by a testing and commissioning period.

In September 2016, the UCA campus in Naryn will open its doors to the University’s first class of 30 undergraduate students.

Opportunities for Employment and Contractors

In 2013, UCA has awarded six works packages to local Naryn construction companies to perform the preparatory works which include water and power supplies, telecommunications systems and welfare facilities, as well as concrete batching plant foundations and ground works.

As construction progresses towards major development in early 2014, between 20 and 30 total works packages will be further procured by UCA, with the majority of works packages being tendered to Kyrgyz contractors.  Contractors will be contractually obligated to employ minimum levels of local and Kyrgyz staff.

Site Preparation and Community Development
UCA has completed several works to prepare the site for construction. The University established two nurseries and has planted 60,000 trees, plants and shrubs which will be replanted on and around the campus site. Using stone sourced from the Naryn River, UCA has constructed over 2.4 kilometres (km) of green and gabion wall, securing campus boundaries and stabilising the Naryn River bank. High voltage power lines were diverted when a portion of the Naryn State Road was rerouted off the campus site, and telecommunication lines were diverted onto the site.

UCA’s commitment to the development of communities surrounding the campus site has led to construction works aimed at engaging those communities and improving their quality of life. These include providing a secure 24 hour water supply to Tosh Bulak village near the campus site. A 2.4 km portion of the diverted Naryn State Road was completed, with a pedestrian footpath, street trees and lighting, and presented to the Government of the Kyrgyz Republic. The 2,300 m² Naryn Central Park, adjacent to UCA’s Naryn Town Campus, was developed by UCA for the citizens of Naryn.

The UCA Town Campus has already established UCA as a presence in the Naryn region. The 3,000 m² building was officially opened in 2011 and houses the University’s School of Professional and Continuing Education. The facility is equipped with state-of-the-art learning technologies, two computer laboratories, four classrooms and a 7,476-volume library. The School is a leading provider of adult and continuing education, reaching over 13,500 learners in the Kyrgyz Republic.

In 2012, UCA opened its first public facilities at the main campus site – a football pitch and tennis courts. The size of the football pitch conforms to international standards and the artificial surface tennis courts are also of international standard. Both facilities were physically built by residents of Naryn Town and Tosh- Bulak village and managed by UCA’s construction team.  They will serve the Naryn community and UCA students.

Reflecting its commitment to cultural preservation, UCA supported an archeological excavation on the Naryn campus site in 2012 and 2013.  Led by Kubat Tabaldiev, professor at Kyrgyz -Turkish Manas University and executed with permission from the Kyrgyz Ministry of Culture, the excavation revealed 45 ancient internment sites as well as memorial fencing, petroglyph drawings, signs on stones and artifacts spanning the Stone, Bronze, early Iron and Middle ages. All artifacts discovered during the excavation have been transferred to Bishkek for further study.

9735 - Vice-Governor of Naryn Oblast, Ms Chinara Abdraimakunova addressed the media and emphasised the importance of the UCA partnership.

The University of Central Asia

The University of Central Asia (UCA) was founded in 2000. The Presidents of Tajikistan, the Kyrgyz Republic, and Kazakhstan, and His Highness the Aga Khan, signed the International Treaty and Charter establishing this secular and private University; ratified by the respective parliaments, and registered with the United Nations. UCA brings with it the commitment and partnership of the broader Aga Khan Development Network. For more information on UCA, please visit website at www.ucentralasia.org.

His Highness the Aga Khan is founder and Chairman of the Aga Khan Development Network (AKDN), a group of private, non-denominational development agencies working to empower communities and individuals to improve living conditions and opportunities, especially in sub-Saharan Africa, Central and South Asia, and the Middle East. The Network’s nine development agencies focus on social, cultural and economic development for all citizens, regardless of gender, origin or religion. The AKDN’s underlying ethic is compassion for the vulnerable in society. Its annual budget for non-profit development is US$625 million. In Kyrgyzstan, more than 1,000 people most of who are local citizens are directly employed by AKDN and its various agencies. For more information on AKDN, please visit website at www.akdn.org 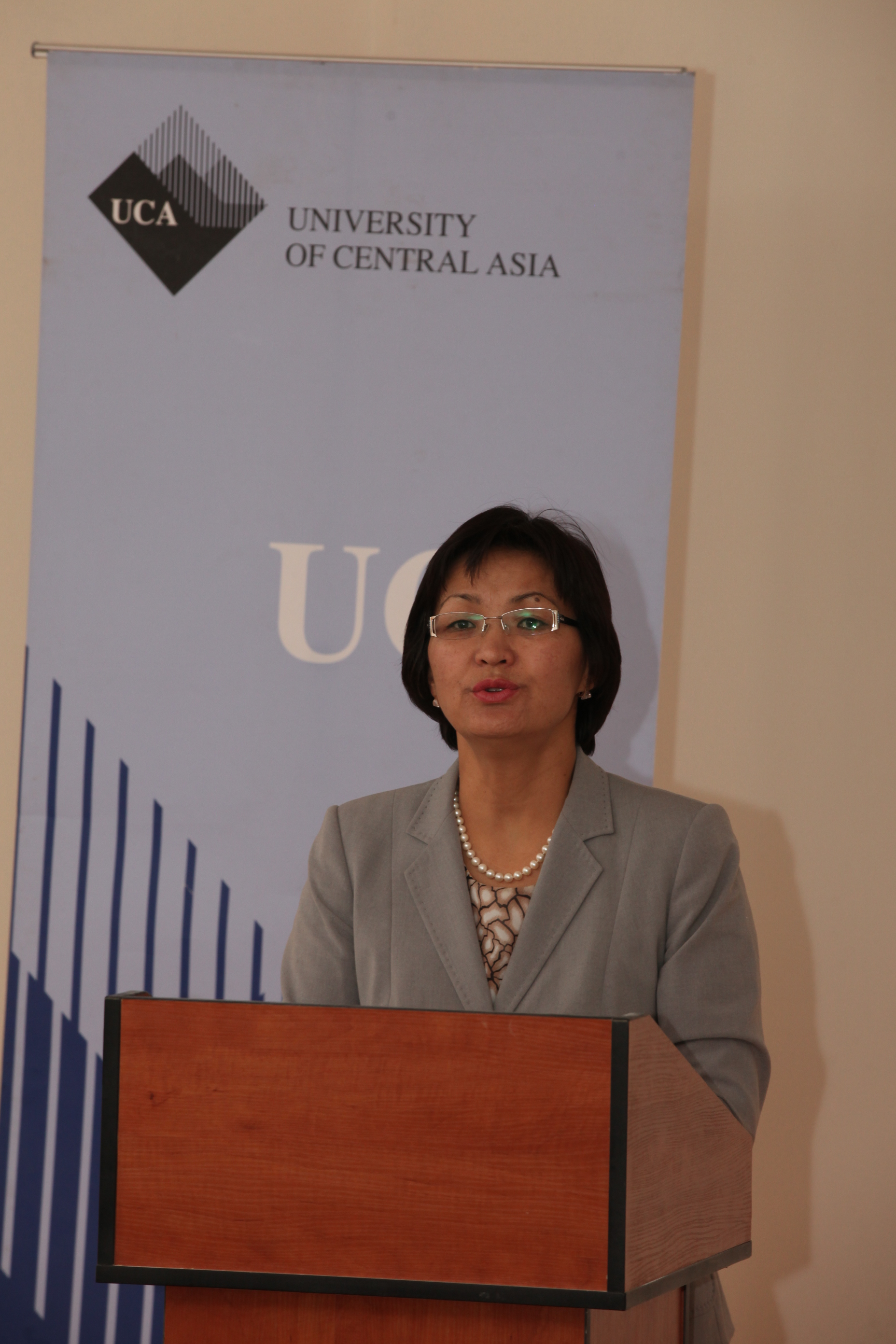 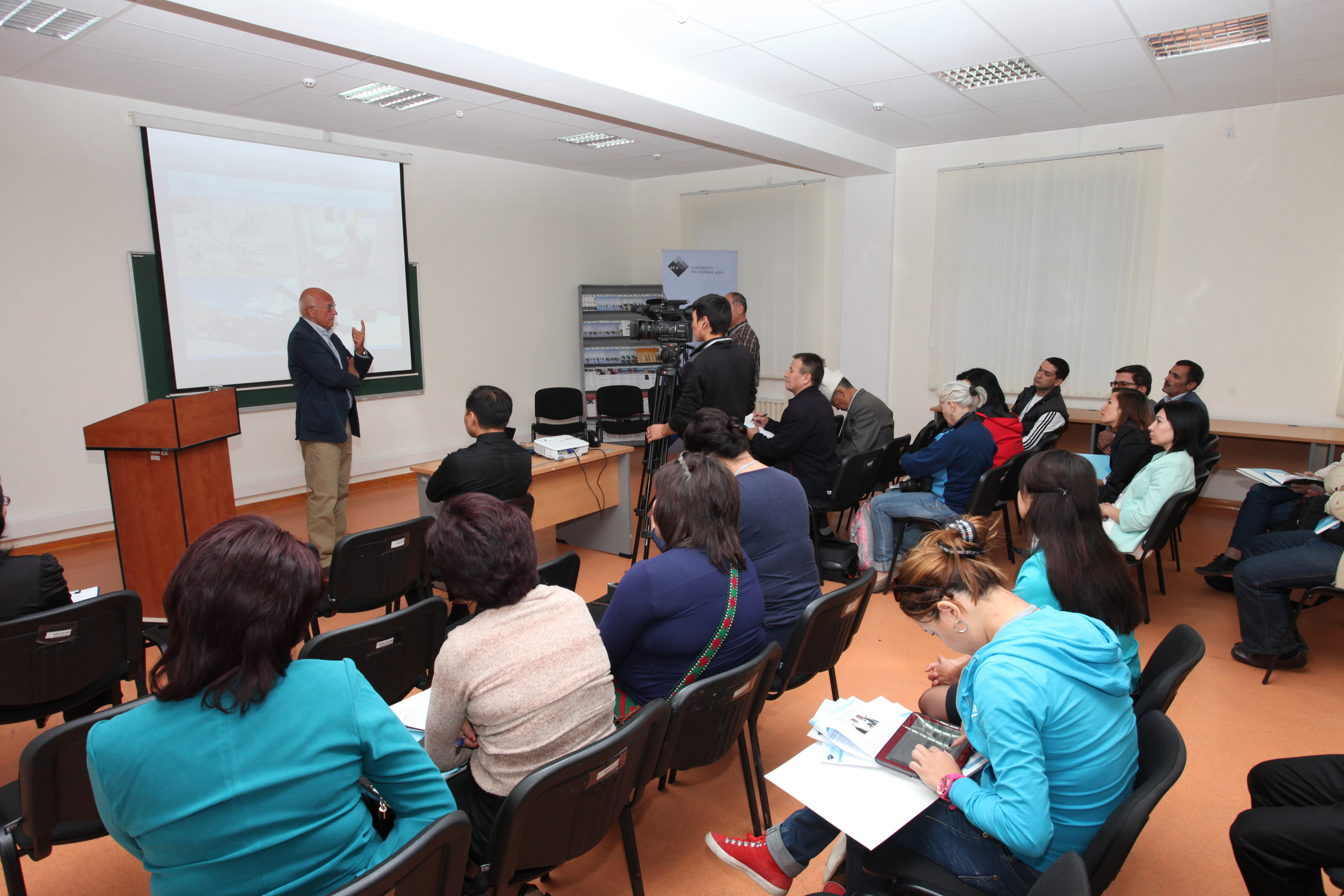 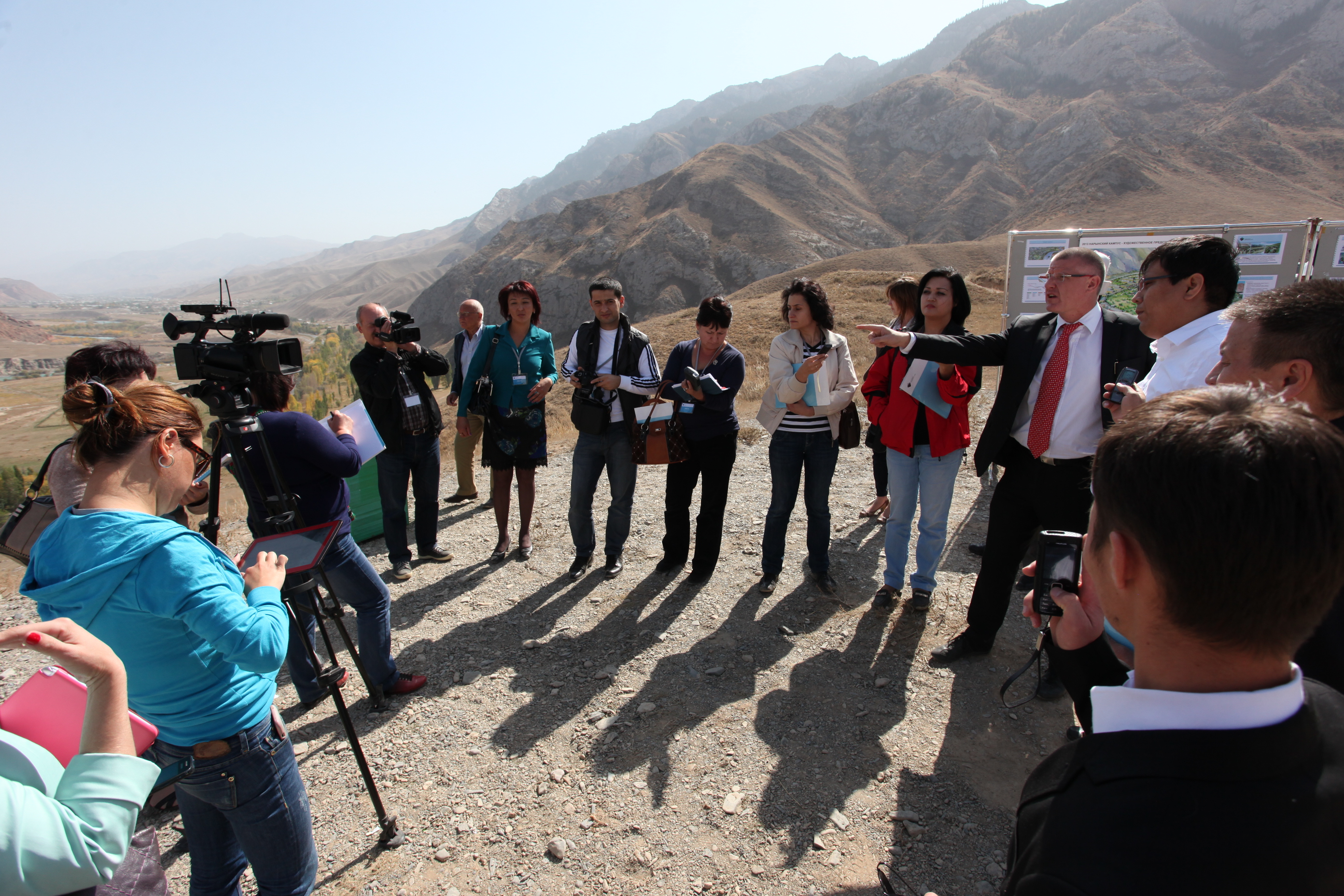 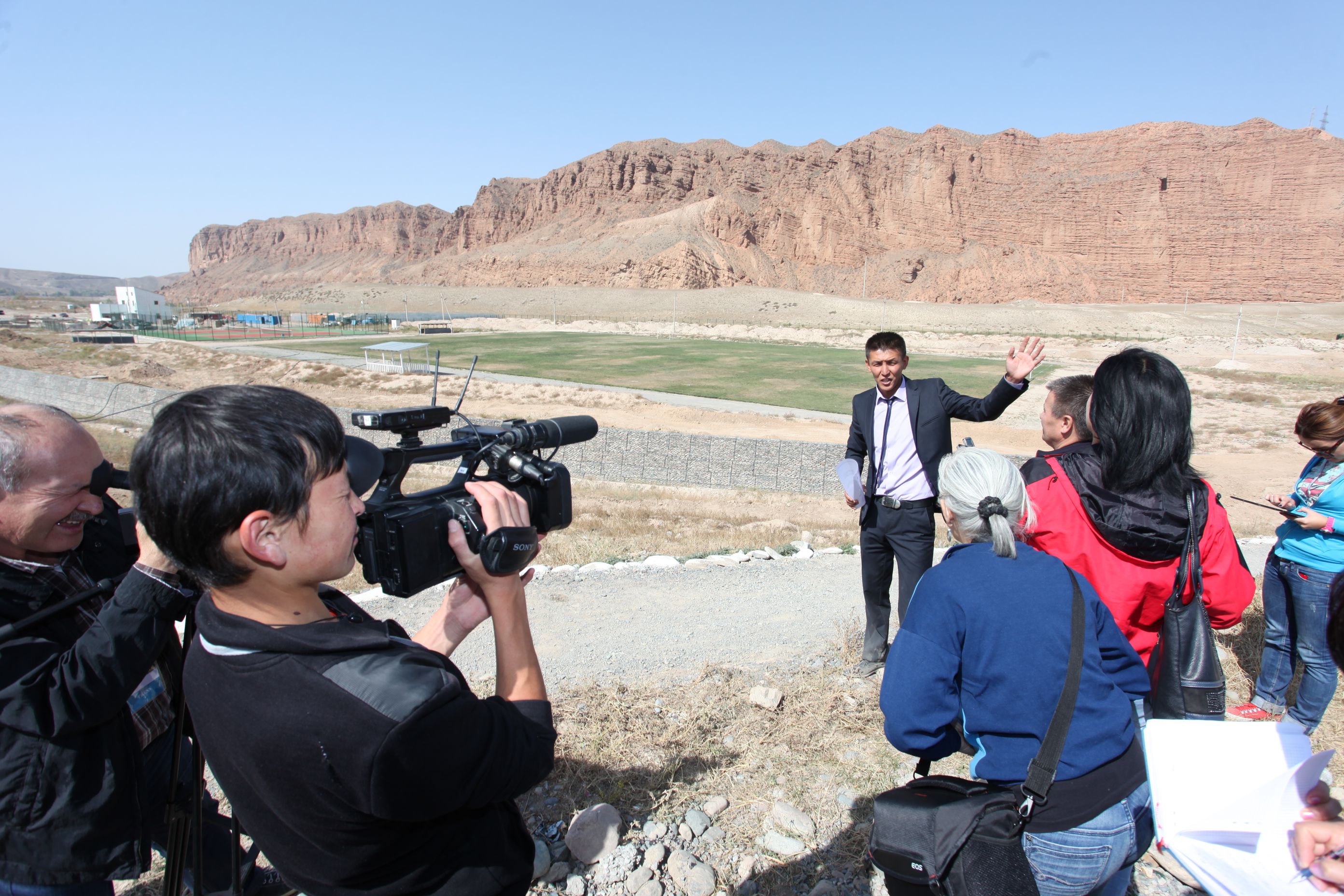 ​ Microsoft has been monitoring how its employees are faring during the pandemic through a variety of means, including all-hands ...